I got my Dana wireless by AlphaSmart about thirteen months ago so it feels like a good time to comment on how well I like the electronic critter. I do this partly because last week I attended the Willamette (rhymes with dammit) Writers’ Conference a week ago. People saw me using my Dana to take notes and would ask what the little widget was and how I liked it. “I’ve seen those in The Writer magazine and Writer’s Digest but I didn’t know if they were good or not.” 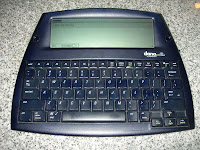 Bad Behavior has blocked 512 access attempts in the last 7 days.