Hey Homes, ‘sup? Did y’all know you was being played for a chump? Played by people with more agendas than congress.

Which brings me to your statement on Monsanto’s herbicide, RoundUp, and more specifically, its active ingredient, glyphosate.

“New questions about the safety of Monsanto weed killer Roundup are deeply troubling. I worked on the glyphosate issue last term and I believe consumers should immediately stop using Roundup, whose core ingredient glyphosate has been labeled a likely carcinogen and has been linked to non-Hodgkin’s lymphoma by the International Agency for Research on Cancer. We need to find out if Monsanto or the Environmental Protection Agency misled the public.”

“Reports suggest that a senior official at the EPA worked to suppress a U.S. Department of Health and Human Services review of glyphosate, and may have leaked information to Monsanto. I believe that a Department of Justice investigation is warranted to look into any potential misconduct by employees of the EPA. I also believe a congressional hearing is immediately warranted.” 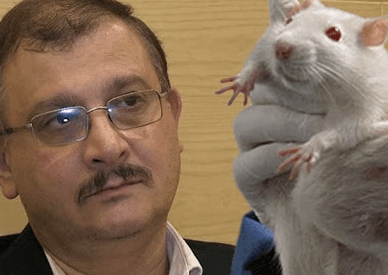 So Ted, you met behind closed doors with some folks from NGOs who said they are independent scientists, so you could get the down low on Monsanto and all. These “independent scientists,” no doubt, told you that glyphosate, after forty years of use with no one ever reporting any ill effects, had now turned up suppressed evidence that it caused all kinds of shit. No doubt, they showed you pictures of tumor-ridden rats.

I know I wasn’t there, but trust me, they blew smoke up your ass, Homes. They blew smoke so far up yo ass, that you be now jonesing for a cigarette.

How do I know that these “independent scientists” lied to you? They lied (the same kind of green ecology experts) to me about how pollution was getting worse (it wasn’t it was getting better) and stuff they are still going on about. And what these “independent scientists” didn’t tell you was a) The breed of rats used is subject to spontaneous tumor development. b) The control group is never shown. This is a big Red Flag. The control group, given the species, would also have had tumors. c) The study size was woefully inadequate. Beware small study sizes. Not enough rats were used for decent statistical analyses. d) The Séralini rat study was redacted due to these problems.

Do you have any idea how ill-informed this statement is: glyphosate is “linked to non-Hodgkin’s lymphoma” by IARC. You are too smart a guy to not know that correlation does not mean causation, but somehow, after forty years, these guys have “linked” it to NHL. How? Fucking smoke and mirrors, Ted. Smoke and mirrors. Oh, and lying their asses off, using real scientific research and claiming effects the polar opposite of what the research papers found. See what I wrote a few days before for more on this (http://normbenson.com/timberati/2017/03/17/congressmans-ted…orse-rides-again/).

As an example, take a look at how pseudo-science works, I’ll link sales of organic to autism for you. Are they really linked? Of course not. Although affluent people who are more likely to buy organic food, will have more ability to have their children diagnosed for such ailments.

As I point out in my previous post, to get glyphosate into the 2a classification took a monumental effort to distort findings. As toxicologist Frank Schnell says, such papers are “designed to make your head hurt, so that you won’t hear that soft little voice of common sense in the back of your head whispering ‘this is all bullshit, isn’t it?.’”

So despite what you heard about glyphosate, despite what these independent experts with PhD in their titles told you, they don’t know the scientific process. They start, and end, with the hypothesis, that is their narrative.  If they don’t get the “right” answers, they tweak the data or simply lie. Nothing matters but the narrative.

Bullshit dressed up with sciency-sounding jargon is still just bullshit. Bullshit may be good for organic gardens but it is not something to base policy on.

Forgive me, I haven’t introduced myself. I am Norm.

Photograph by Carol M. Highsmith of canals in Venice, California

You don’t know me but I grew up in your district, in Venice, in fact. Though I graduated from Venice High (go you mighty Gondos!) before you were born and the neighborhoods have upscaled, it is still the progressive liberal area it was when I lived there. Old Abbot Kinney would never recognize the place now.

There weren’t going to be any forests left

In fact, I chose my career, in part, due to facts I learned from my liberal friends, that the coast redwoods were being made extinct by Weyerhauser, Georgia-Pacific, Louisiana-Pacific, and any other lumber company. The redwoods would disappear in a generation, according to the emerging ecology movement. I attended Santa Monica City College (to say I studied at SMCC would be stretching the truth) and heard all about the peril of the redwoods (and the earth) at the first Earth Day event.

The Four Horsemen were about to mess us up

Y’all might have read about it. The speakers said something like this: “Brothers and sisters the world careens toward a Malthusian catastrophe, the likes of which the world has never seen.” The high prophet of 1968, Paul R. Ehrlich summed it up for us: “The battle to feed all humanity is over. In the 1970s the world will undergo famines–hundreds of millions of people are going to starve to death in spite of any crash programs embarked upon now.” We were accelerating toward the brink; the point of no return. We will see droughts and mass starvation; forests reduced to stumps, no oil, foul air, frozen earth [scratch that frozen bit, and put in scorched due to global warming instead] and polluted water.

As a result, Ted, I decided to be a forester to save the forests. Hey when you are in your teens, you can do anything. Also, more importantly, when you listen only to your tribe, you believe anything they say. After all, why would they they lie?

Do you know how many of their predictions came true or even close to true? None. Nearly fifty years after that first Earth Day, and literally nothing I heard was right. What did happen was exactly the opposite of what these experts predicted–and are still predicting–but unlike a broken clock they won’t be right even once. Johan Norberg shows here what really happened.

How the world changed in 25 years. pic.twitter.com/pJgP8vJa8v

Bad Behavior has blocked 554 access attempts in the last 7 days.