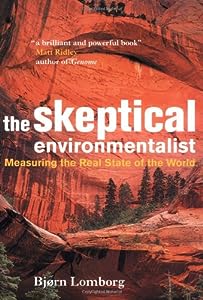 Cover of “The Skeptical Environmentalist: Measuring the Real State of the World” Cover via Amazon

“When the facts change, I change my mind. What do you do, sir?” – John Maynard Keynes.

It appears we are witnessing the crumbling of the green movement, as we know it. Dr. James Lovelock, who postulated the ‘Gaia hypothesis’ of earth operating as a self-regulating organism, is the latest to stray, if not exactly leave the faith. The list non-orthodox greens grows continually and now includes Mark Lynas, the author of The God Species and Stewart Brand, the author of the iconic Whole Earth Catalog.

Perhaps the first to change his mind and leave the Greens was Dr. Patrick Moore, a co-founder of Greenpeace. He felt those in the environmental movement had made their point,

“[W]hen a majority of people decide they agree with you it is probably time to stop hitting them over the head with a stick and sit down and talk to them about finding solutions to our environmental problems,” Patrick Moore says.

Greens have always been fractious, and similar to the Tea Party on the right, they hate compromise. Former Greenpeace director Paul Watson berated Patrick Moore in an email: “you’re a corporate whore, Pat, an eco-Judas, a lowlife bottom-sucking parasite…” And, Bjørn Lomborg, author of The Skeptical Environmentalist took a pie in the face from then true believer, Mark Lynas.

At the heart of the disagreement sits the use of technology. “There is a battle underway for the soul of environmentalism,” writes freelance journalist Keith Kloor, “It is a battle between traditionalists and modernists. Who prevails is likely to be determined by whose vision for the future is chosen by a new generation of environmentalists.”

Traditionalist Greens say, “Stop!” Technology is the Problem. The Worldwatch Institute says we should not simply stop growing our economies, but we must actually contract: “The rapidly warming Earth and the collapse of ecosystem services show that economic ‘degrowth’ in overdeveloped countries is essential and urgent…. Degrowth can be achieved through policies to discourage overconsumption, raising taxes, shortening work hours, and ‘informalizing’ certain sectors of the economy.” The goal, Rik Scarce writes in his book “Eco-Warriors,” is to arrive at “a steady-state relationship with all of nature’s creations, wherein human attitudes and actions dominate no one and no one thing. Their alternative seeks to guarantee life, liberty, evolution, and happiness for humans and non-humans alike.”

Modernist Greens say that technology has a role in making the world greener and more livable for all creatures, including humans. Stewart Brand says “If Greens don’t embrace science and technology” they risk becoming irrelevant.

The modernists are in favor of cities, people, and technology (including genetically engineered food).

Cities, people, and technology are…good? What is happening? Has the world gone crazy?

Perhaps the world is crazy. (Not exactly a news flash now, is it?)

As you know, I have argued on these pages that people, cities, technology, and economic growth have not only improved our lives here in the United States, but have improved the environment. Economic growth using non-renewables has overall been beneficial. The author of “The Rational Optimist,” Matt Ridley notes that technology takes less land and uses materials other species do not want:

“[E]conomic development leads to a switch to using resources that no other species needs or wants…. Contrast Haiti, which relies on biomass (wood) for cooking and industry, with its much (literally) greener neighbour the Dominican Republic, which subsidises propane for cooking to save forest…. [E]conomic growth leads to a more sparing use of the most important of all resources – land.”

Is economic growth and technology a wonder cure? A panacea that works with no side effects? No. But, then everything has its upsides and downsides.

If we humans continue to move from rural to urban (cities are denser), drill and mine for our energy rather than grow it, continue to wring more food and fiber from each acre, and develop incentives for conserving water and our fisheries, we will yet leave a better place for our (and Nature’s) children and grandchildren.

Matt Ridley sums it up well:

“Seven billion people going back to nature would be a disaster for nature.”

Bad Behavior has blocked 457 access attempts in the last 7 days.